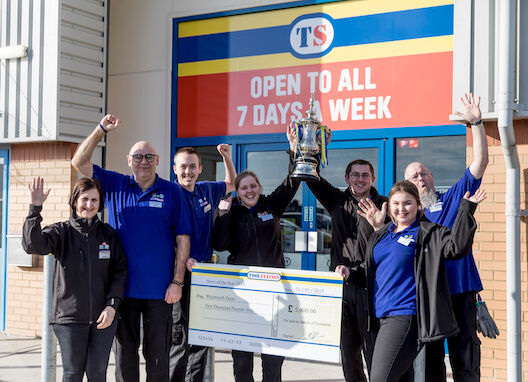 Toolstation’s Weymouth branch has been named the national retailer’s best out of all its stores across the UK.

Chantelle Lane, store manager at Toolstation Weymouth, was delighted to receive the award at the annual Toolstation retail conference, and praised the ethos of her team in demonstrating a passion for their work:

“I’m incredibly proud of what my team has accomplished over the year and the work ethic they have displayed. They’ve have had their sights set on this award, so I was over the moon to bring the trophy home to them.” said Chantelle. “We are a team of eight, and over the years we have developed great working relationships and all love coming to work, which I think is the key to our success. There is a natural desire to support and care for each other, together with a true passion for customer service and making sure they get the best possible experience when visiting the Weymouth store.”

“Weymouth was chosen as a winner of Toolstation store of the year due to the fantastic team. The store team epitomises our culture, with a real passion around doing what's right for our colleagues and customers.  The team are like a family and look out for each other, doing the small things from bringing in lunch for each other to even babysitting!  They have incredibly low employee turnover, world-class customer service scores and a store setup that ensures customers can get what they came for in a friendly and enjoyable environment.”

Toolstation Weymouth is located at Unit A3, Link Park, Chickerell Link Road, Weymouth, DT3 4FL and offers a large range of products that includes all the essentials such as screws, cables, sealants, plumbing fittings and power tools as well as leading branded products such as Makita, Stanley, DeWalt, Mira and Crown Paints.