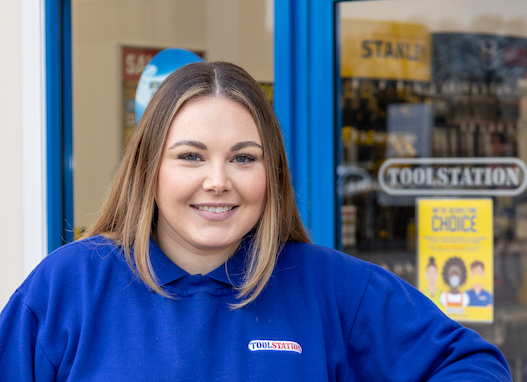 Toolstation regional manager Gemma Tysoe proves there is no better way to start a career than starting off with a part-time job. Gemma, from Chester, joined Toolstation with a Saturday job in her local branch, and gradually worked her way up to regional manager for the North West and parts of Wales. Now she is responsible for overseeing branches across the region, developing teams, building customer relationships, sharing ideas to improve sales and leading and engaging a huge team.

Describing how it all began with Toolstation, Gemma said: “It was actually all down to my dad.

“He shopped there daily in his role as a joiner, and he saw a job posting at my local branch and that set me on my way. I applied for the job and got a call two days later.

“I was studying business at school and the 16 hours a week suited me perfectly. It meant I could work over the Saturday and Sunday, get some money together and then concentrate on studying during the week.”

Gemma said that when a supervisor role came up at her branch her manager at the time pushed her to apply.

“The rest is history,” she added. “I had been a supervisor for five years when a branch manager role came up and I applied. That’s when things became more serious. I was now responsible for managing other staff, so I began to learn and absorb from other store managers, my line manager and supervisors.

“In 2018 the regional manager role came up which I applied for – it couldn’t have been more perfect.”

Gemma said that working her way up has given her valuable insight into how the company works and she has benefitted from regular training opportunities along the way.

“It means that I learnt the detail for every job I was given, and that helped me understand the business,” she said.

“After only a couple of years I got the chance to go on a Toolstation development programme where I went on courses to learn about things including health, safety, people management and more. These courses were face-to-face and remote learning, and were a big part of my development.”

Describing why she enjoys coming to work every day, she said: “For me, it’s all about the people and the variety. I love working with large groups of people and with Toolstation growing so rapidly no two days are ever the same.”

Gemma’s top tips for turning a part-time job into a full-time role include:

1. Be dedicated
2. Always show a willingness to learn new things
3. Understand what is expected from you in your role
4. Be on time and follow through on any commitments or promises you make
5. Get to know people and share your experiences

Interested in starting your career journey with Toolstation? Take a look at our current vacancies.