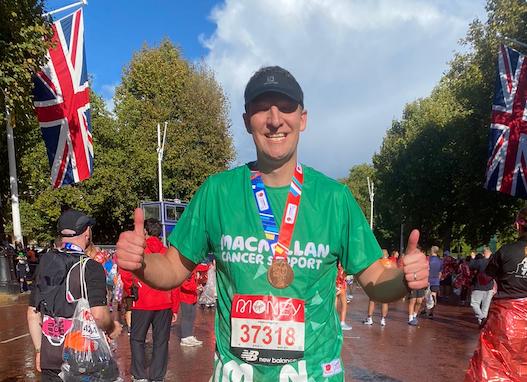 Three of our directors raised a whopping £67,000 for Macmillan Cancer Support by running in the London Marathon last year.

James took the 26.2 mile course in his stride, despite suffering from a foot infection and even managed to stop off for lunch part way round! Simon beat the other two to the finish line in just 4 hours and 48 minutes.

The terrific trio had aimed to raise £30,000 but achieved more than double this, thanks to the generous donation from family, friends and Toolstation colleagues as well as from those in the wider industry.

All three said the amazing camaraderie of fellow runners and the enthusiastic support from those who lined the route led to some great high points during the race.

Simon said: “One in two of us will face a cancer diagnosis at some point in our lives, so it really is something that affects us all. We wanted to run the marathon to give ourselves a real challenge, raise awareness and of course, raise lots of money in order to support such a fantastic cause. It costs £38 per hour for a Macmillan nurse to offer the fantastic support and services that they do to all those people suffering from cancer. They are funded by the public, they don't get any funding anywhere else, so we were really keen to raise money for this fantastic cause - so much so we’re running it again this year and trying to raise even more!”

James admitted that a low point for him was being overtaken by the legendary Wheelie Bin Man, who was running with a wheelie bin strapped to his back. Simon said he was frustrated to see someone dressed as a submarine go past him, but managed to recover his self respect by then overtaking a rhino!